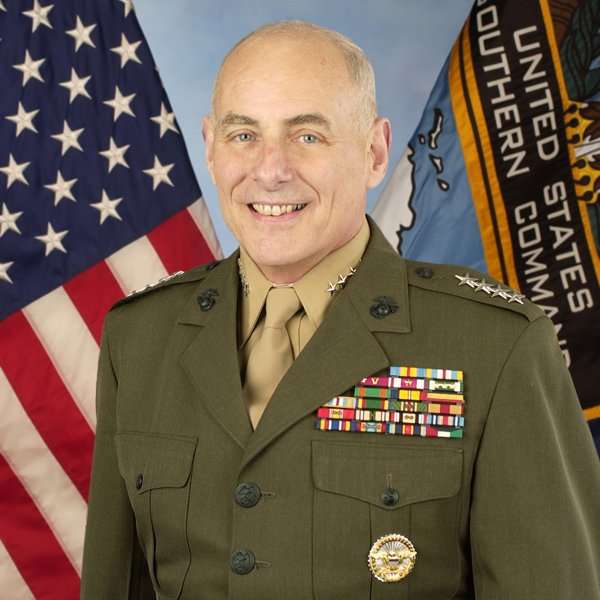 Secretary Kelly was born and raised in Boston, Massachusetts. He enlisted in the Marine Corps in 1970, and was discharged as a sergeant in 1972, after serving in an infantry company with the 2nd Marine Division, Camp Lejeune, North Carolina. Following graduation from the University of Massachusetts in 1976, he was commissioned an Officer of Marines.

As an officer, Secretary Kelly served in a number of command, staff and school assignments to include sea duty, instructor duty at The Basic School, the Infantry Officer Course, command of the 1st Light Armored Reconnaissance Battalion, attendance at the National War College, and duty on Capitol Hill as the Commandant’s liaison to the U.S. Congress. He also served as the Special Assistant to the Supreme Allied Commander, Europe, in Mons, Belgium.

He returned to the United States in 2001, and was assigned duty as the Assistant Chief of Staff G-3 with the 2nd Marine Division. In 2002, selected to the rank of Brigadier General, Secretary Kelly again served with the 1st Marine Division, this time as the Assistant Division Commander. Much of the next two years was spent deployed fighting in Iraq. He then returned to Headquarters Marine Corps as the Legislative Assistant to the Commandant from 2004 to 2007. Promoted to Major General, he returned to Camp Pendleton as the Commanding General, I Marine Expeditionary Force (Forward). The command deployed to Iraq in early 2008 for a year-long mission as Multinational Force-West in Al Anbar and western Ninewa provinces. After rotating home and being confirmed as a Lieutenant General he commanded Marine Forces Reserve and Marine Forces North from October 2009 to March 2011. He then served as the Senior Military Assistant to two Secretaries of Defense, Messrs. Gates and Panetta, from March 2011 to October 2012 before being nominated for a fourth star and command of the United States Southern Command (SOUTHCOM), a position he held until January 2016.

During his 39 months in command of SOUTHCOM he worked closely with the remarkable men and women of U.S. law enforcement, particularly the FBI and DEA. He also worked intimately with Secretary of Homeland Security Jeh Johnson and the equally remarkable men and women of the Department of Homeland Security, particularly in dealing with the flow of drugs, people and other threats against the U.S. homeland that flow along the trans-national criminal networks into the U.S. from the south. This relationship was a model of interagency cooperation and effectiveness.

After less than a year in retirement Secretary Kelly was offered the opportunity to serve the nation and its people again, now as the Secretary of Homeland Security. After he and his family served a lifetime in service to the nation—and knowing no other life—the opportunity to serve again was welcomed. The U.S. Senate gave him and his family the great honor of confirming him on January 20, 2017 and he was immediately sworn in as the fifth Secretary of Homeland Security. After six months, he was selected to serve as White House Chief of Staff, a position he held until January 2019.