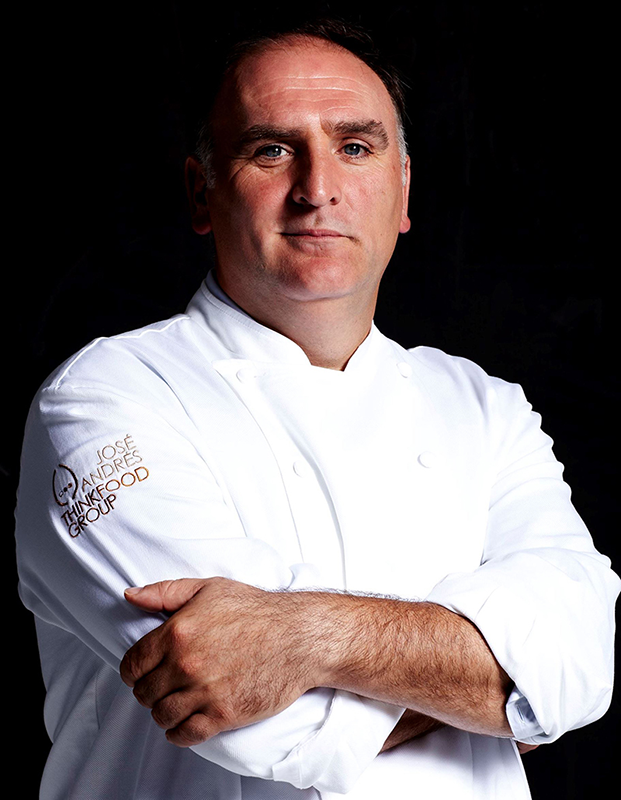 Named one of Time’s “100 Most Influential People” in both 2012 and 2018 and recipient of the 2015 National Humanities Medal, José Andrés is an internationally-recognized culinary innovator, author, educator, humanitarian, and chef/owner of ThinkFoodGroup.

A pioneer of Spanish tapas in the United States, he is also known for his groundbreaking avant-garde cuisine and his award-winning group of nearly three dozen restaurants located throughout the country and beyond. ThinkFoodGroup’s concepts include the two Michelin-starred minibar by José Andrés in Washington, DC, the acclaimed NYC food hall Mercado  Little Spain, and multiple locations of the Bazaar by José Andrés. José has received the James Beard Foundation’s “Outstanding Chef” and “Humanitarian of the Year” awards.

Andrés is a committed advocate of food and hunger issues and is known for championing the role of chefs in the national debate on food policy. In 2010, Andrés formed World Central Kitchen, a non-profit specializing in delivering food relief in the wake of natural and humanitarian disasters. Since serving nearly 4 million meals to the people of Puerto Rico following the devastation of Hurricane Maria, World Central Kitchen has responded to dozens of disasters worldwide and distributing tens of millions of meals in the process. In response to the COVID-19 pandemic, the organization has partnered with restaurants, small farms, and community leaders around the country to combat food insecurity. A naturalized U.S. citizen  originally from Spain, Andrés has been a tireless advocate for immigration reform and on July 4, 2014 was named by President Barack Obama as that year’s “Outstanding American by Choice.”