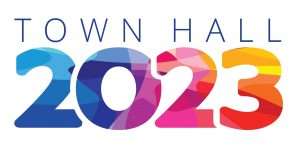 Order with us in whichever way is most convenient to you:

Subscriptions are available at the following price ranges:

The 42nd season of bringing influencers from the world stage to our stage in Sarasota returns in January 2023.

For our January program, TOWN HALL will welcome Maria Ressa, 2021 Nobel Prize Winner. Maria is the co-founder, CEO, and executive editor of Rappler.com, an online news organization in the Philippines. Maria, one of TIME’S “Person of the Year” for 2018 and TIME’s “100 Most Influential People” in 2019, has been honored around the world for her courageous and bold work in fighting disinformation, fake news, and attempts to silence the free press. In 2021, she was awarded the Nobel Peace Prize for her work in exposing abuses of power and growing authoritarianism under the Philippine president. She is the first journalist, since 1935, to win the Nobel Peace Prize for her efforts to safeguard freedom of expression.

Michael Phelps, the most decorated Olympian, will be joining the series in February. Michael was born in Baltimore, Maryland, and got serious about swimming after joining the North Baltimore Aquatic Club. Phelps, a prodigy at the sport, got close but did not medal at his first Olympics, in Sidney 2000, when he was 15 years old. Michael would go on to dominate the next four Olympic Games, finishing the most decorated athlete at each one. Since retiring from swimming in 2016, he has become a devoted husband and father to three boys; and opened up to the public about his struggles with depression and ADHD throughout his career. He is now an outspoken advocate for mental health awareness.

A Florida native, Admiral James Stavridis NATO’s 16th Supreme Allied Commander will speak as a trusted authority on the European crisis and global security.  Admiral Stavridis attended the US Naval Academy at Annapolis, and spent 37 years in the Navy, rising to the rank of 4-star Admiral. Among his many commands were four years as the 16th Supreme Allied Commander at NATO, where he oversaw operations in Afghanistan, Libya, Syria, the Balkans, and counter-piracy off the coast of Africa. He is a contributing editor for TIME Magazine and authored 10 books on leadership, the oceans, maritime affairs, and Latin America.

In March, TOWN HALL will welcome José Andrés: Chef, Restaurateur, and Humanitarian. José Andrés is an internationally-recognized culinary innovator, author, educator, humanitarian, and chef/owner of ThinkFoodGroup. A pioneer of Spanish tapas in the United States, he is also known for his groundbreaking avant-garde cuisine and his award-winning group of nearly three dozen restaurants located throughout the country and beyond. He believes we can use nourishing meals to empower people and rebuild communities. Tapping the same innovative spirit that earned his restaurants Michelin stars, Andrés formed World Central Kitchen in 2010, which provides meals in response to humanitarian, climate, and community crises.

In early April 2023, Thomas Friedman three-time Pulitzer Prize winner rejoins the lecture series, being only the second person to be invited back to TOWN HALL. Friedman is an author and American political commentator. Renowned for his direct reporting and accessible analysis of complex issues shaping the US and the world. He is the winner of three Pulitzer Prizes and cited by the Pulitzer board for his clarity of vision, extensive reporting, and commenting on the worldwide impact of terrorist threats.

Follow us on our social media platforms for news and updates: